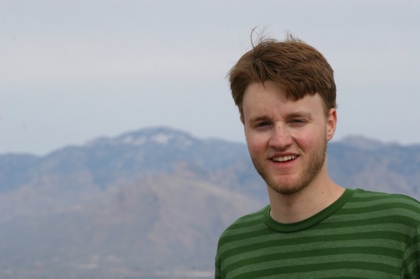 “My son, Devon Hollahan, disappeared in Frankfurt, Germany on Saturday, November 21st at approximately 3AM, local time. Devon and his friend, Josh Friedman, had taken a train from Prague, where they both live and work, on Friday, the 20th to attend a concert in Frankfurt and to stay for the remainder of the weekend. Both Josh and Devon had purchased round-trip train tickets.

According to Josh, they had enjoyed the concert, attended the “after party”, and had taken a cab to central Frankfurt to look for their hostel. They had been drinking. Beer, mostly and, according to Josh, they were “tipsy”, but not inebriated. After looking for several minutes, Josh stepped away from Devon to ask a couple of bystanders for directions. When he turned around, Devon was nowhere to be seen. After attempting to text and phone Devon numerous times, Josh gave up and went to the hostel. The following morning, he checked with the hostel to see if Devon had checked in on his own and found out he had not. He also checked a couple of other nearby hostels to no avail. At some point Saturday, Josh contacted the Frankfurt police and the US Consulate to file a missing person report. He waited for Devon at the train station at the appointed departure time, but Devon never showed up.

Josh called me from Prague at around 3PM MST to give me the news.

We have German-speaking friends who called the Frankfurt Police to consider options. At 12:30 AM, Monday morning, I called the US Consulate and spoke to Franz Seitz who was already familiar with the case. We spoke for 30 minutes. Mr. Seitz was very receptive and helpful. We discussed Devon’s credit card activity, which wasn’t (and still isn’t) unusual. He had made 2 stops at ATMs in addition to purchasing train tickets in Prague – nothing since. Early this morning, I received an email from Mr. Seitz indicating the had checked ambulance services, hospitals and jails with no results. I believe the consulate has spoken to Mr. Friedman at least once and maybe twice.

I am obviously concerned for my son. Always an independent soul, he is also responsible and diligent. This type of behavior is totally out of character.

Devon Hollahan is 22 years old, 6 feet tall and weighs approximately 150 pounds. When last seen, Devon was wearing a green, plaid shirt, jeans, a black work jacket (sport coat?) and a tan cap. He was last seen in the vicinity of the Taunusalange metro station in central Frankfurt. Pictures are attached.

Thank you for your help,